Today’s post is the first in what I hope will become a semi-regular series about exoplanets: planets that orbit stars other than our Sun. I’ve decided to start with an exoplanet named Orbitar. 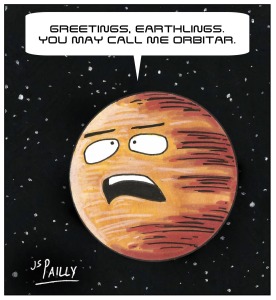 In December of 2015, the exoplanet designated 42 Draconis b was officially renamed Orbitar following a public naming contest held by the International Astronomy Union. Orbitar is a gas giant planet orbiting a red giant star approximately 315 light-years away in the constellation Draco.

The gravitational pull between planets and the stars they orbit causes stars to wobble in place. When the star 42 Draconis was found to wobble at a regular interval of 479 days, it was determined that a large planet with a 479 day orbital period was likely responsible.

Further calculations determined that this planet had an average orbital distance of 1.19 AU and an orbital eccentricity of 38%. The planet’s total mass was estimated to be equivalent to at least 3.88 Jupiters, give or take 0.85 Juptiers.

P.S.: As far as I can tell, the name Planety McPlanetface was not submitted to the IAU’s planet naming contest.

Correction: The “Life on Orbitar’s Moons” section of this post was based on a quote which was misattributed to the Brevard Astronomical Society.  See the comments below.  I can no longer find the original source for that quote.