Enceladus: Too Young for Life?

Does life exist on Enceladus? Maybe. I don’t know. It depends.

Calm down, Enceladian jellyfish thing. We’re still trying to figure this out.

Astronomers recently determined that Enceladus has a decoupled crust, meaning there is a global ocean of liquid water hidden beneath this tiny moon’s surface. Just the kind of environment that could support alien life. But there’s a problem.

A recent scientific paper, entitled “Dynamical Evidence for a Late Formation of Saturn’s Moons,” suggests that Enceladus may be too young for life to have evolved there. (Please note: I typically try to read these sorts of papers in their entirety, but this one is 50 pages long. I think I got the gist of it, but I cannot honestly say I read the whole thing).

If you were a dinosaur, specifically a dinosaur who knew how to use a telescope, you may have been able to watch as a previous generation of Saturn’s moons were destroyed. Perhaps these moons collided with each other. Perhaps they were torn asunder by Saturn’s gravity. Perhaps you would have wondered, with your walnut-sized dinosaur brain, if anything like that could ever happen to Earth.

Anyway, the destruction of Saturn’s old moons left a whole lot of debris, forming a disk of icy and rocky material around the planet. Much of that debris is still there in the rings, but some of it accreted together, forming new moons like Enceladus.

All of this happened, according to this “Dynamical Evidence” paper, about 100 million years ago. That doesn’t give life a whole lot of time to evolve, which is bad news for out Enceladian jellyfish friend. 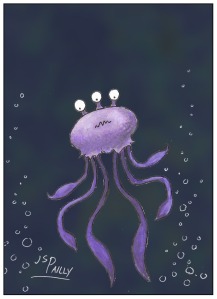 Posted by J.S. Pailly on April 11, 2016 in Uncategorized and tagged Enceladus, Space.